I recently had the pleasure of being invited to Bloomberg Beta’s “Future Founders” event. For those unfamiliar, Bloomberg Beta is a very cool VC fund backed by Bloomberg L.P., with the following focus:

Our overall focus is investing in companies that improve work – these can be individual-facing (not all “enterprise”) so long as they help a person be more productive, knowledgeable, or content at work. Of course they can also be services for businesses.

I’m a huge fan of this fund, and was very excited when they invited me to this event. I was told that Mike Bloomberg would be there. I was intrigued.

I arrive at the Bloomberg office, get my badge, head to the elevators, and immediately run into @anildash. A good sign. We chat for a bit on the way up – he’s an incredibly friendly and sociable person. We joke a bit about the seperation between his personal and professional identities – he mentions that it still feels strange to have such a large online following.

Emerging from the elevators, we make our way to the 28th floor, where the event is held. A wall of windows looks out over Central Park. It had just rained, so the views were utterly spectacular.

We start mingling with the other attendees. Not ten minutes later, I spy @thescottsilver, an old friend of mine from undergrad. We are pleased to see each other. We catch up – he works at Twitter and is contemplating his next moves. I share my desire for increased mathematical depth and technical sophistication. I value our cameraderie.

The evening continues to unfold with exceeding pleasantness. The guests are, to the person, fun and interesting to talk to. Later, I would learn that @strickland_dan, one of the fund members, helped develop an algorithm to detect those with “Founder potential”. He then emailed these people and invited them to this event – the whole thing quite mysterious – reassuring them with the hashtag #notascam. This fund has style.

After about 45 minutes of this, an announcement is made that Mike has arrived and will address the attendees. Everyone begins shuffling, make motions to freshen their drinks, and finally arranges themselves in a semicurcular blob around a small stage.

Mike Bloomberg is there. It strikes me as a singular sort of moment – a man whose name is literally on the building, in a city of which he was a three-term mayor, preparing to address a relatively intimate crowd of capable, accomplished, and ambitious people on the subject of entrepreneurship and leadership. 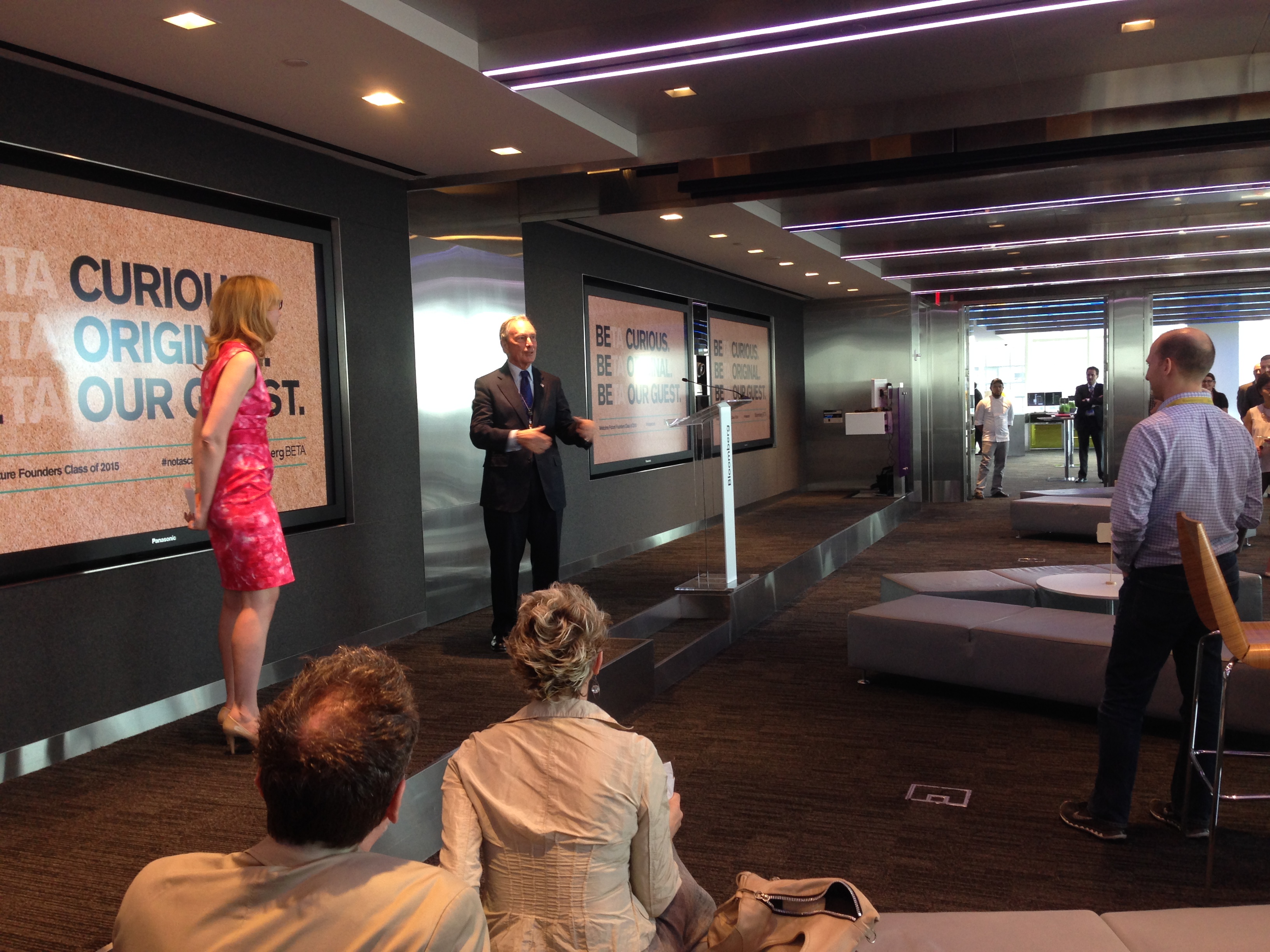 MB opens with what comes off as a relatively standard constellation of vignettes detailing his professional development and the origins of Bloomberg L.P. It is good information, and I was happy receiving it. Proximity to the man adds some gravitas to the thing, as if special attentiveness would be rewarded with secret knowledge. He wraps up, thanks the organizers, and moves to questions.

He spends a lot of time answering questions, which seems appropriate given the nature of the event. Several people ask questions regarding funding. Having single-handedly funded Bloomberg with the $10,000,000 he picked up from Salomon, MB feels somewhat unrelatable on this issue. One man asks for some optimism, to which Mike delivers the (not incorrect) 1% party line of “the world sees fewer deaths, better health, less violence, better material conditions than any time in history”. I happen to strongly agree with this overall sentiment, and think that people have a bad habit of glorifying the past. Anil asks a question about politics. A particularly driven-sounding young man asks about the future of Bloomberg L.P.

Eventually I raise my hand, catch his attention, and deliver my (hopefully) thoughtful beard-stroker:

What is the correct balance of sales to engineering for a young company?

MB seems to react well. Ultimately, he says, “you have to have a product”, something that works and solves a problem for somebody. Sales can only cover up bugs and technical and functional shortcomings for so long. He suggests that “good products sell themselves”, while immediately qualifying by pointing out that his role in the early days of Bloomberg L.P. was pure sales (and some technical support).

This all makes sense, and it is reassuring to hear this answer from someone who has seen and done so much.

He goes on to add that it is permissible to begin selling a product that does not yet exist, and to assess demand and to start to understand the reactions to your product before comitting significant resources to its development. If people are interested in your product, he says, they will be somewhat tolerant and patient while you work out the kinks. He makes analogy to his experience as Mayor of New York, likening the challenge of creating a product to the challenge of developing policy. “If you lay out a compelling vision”, he says, “people will be willing to go along with you”.

I like this answer very much. I’ve often joked with friends that success is striking the right balance between “style” and “substance” – talking up the biggest game that you can actually deliver on. Being too humble means that few people be rallied to support your vision, while being too extravagant will cause you to fail to meet your promises and ultimately lose both face and respect. Professional and personal growth, in my mind, involves setting expectations about 10% too high, pushing yourself to meet them, growing in the process, and then setting them 10% too high again. In math terms, we can think of this as a kind of coordinate descent, where you alternate back and forth between two parameters, iteratively optimizing one at a time. I’m a comically big believer in personal growth as the source of basically everything good, as well as metaphors as a tool for communicating relationships and ideas, so this kind of thinking makes me happy.

Eventually, MB wraps up and leaves the stage. The agenda takes us to the small-group portion of the evening, where we gather around small tables for a social exercise, lathered in a rich sauce of tech humor.

The goal: develop a new ice breaker, beta test it, and “ship it” to an adjacent table.

I am at a table with a number of intriguing people: a woman in communications at Bloomberg, a number of tech executives (including the head of engineering for LinkedIn in New York), and a few people in their twenties with sparkles in their eye. We begin tossing out ideas. I offer my pet icebreaker, “If you could be born into any society has has ever existed, which would it be, and who would you have been?”. I am immediately labeled “the graduate student”, which I don’t mind.

A very cool guy across the table suggests the winning (and admittedly better) icebreaker, which was “If everyone could have a metric displayed above their heads (like the green diamond in The Sims), what would it be?”. Numerous suggestions are made, ranging from “last time they called their Mom” to “number of close friends they have”. Ultimately, we settle on “number of days until they die”, which is intriguing if a bit macabre. (Writing this post, another option came to mind: “a person’s relationship with the person they are speaking to”). We write the icebreaker on a notecard and send it to another table (we are later told it was well received), and then begin chatting amongst ourselves. The LinkedIn guy, myself, and a well-dressed executive looking type decide to take in the view, which is marvelous: 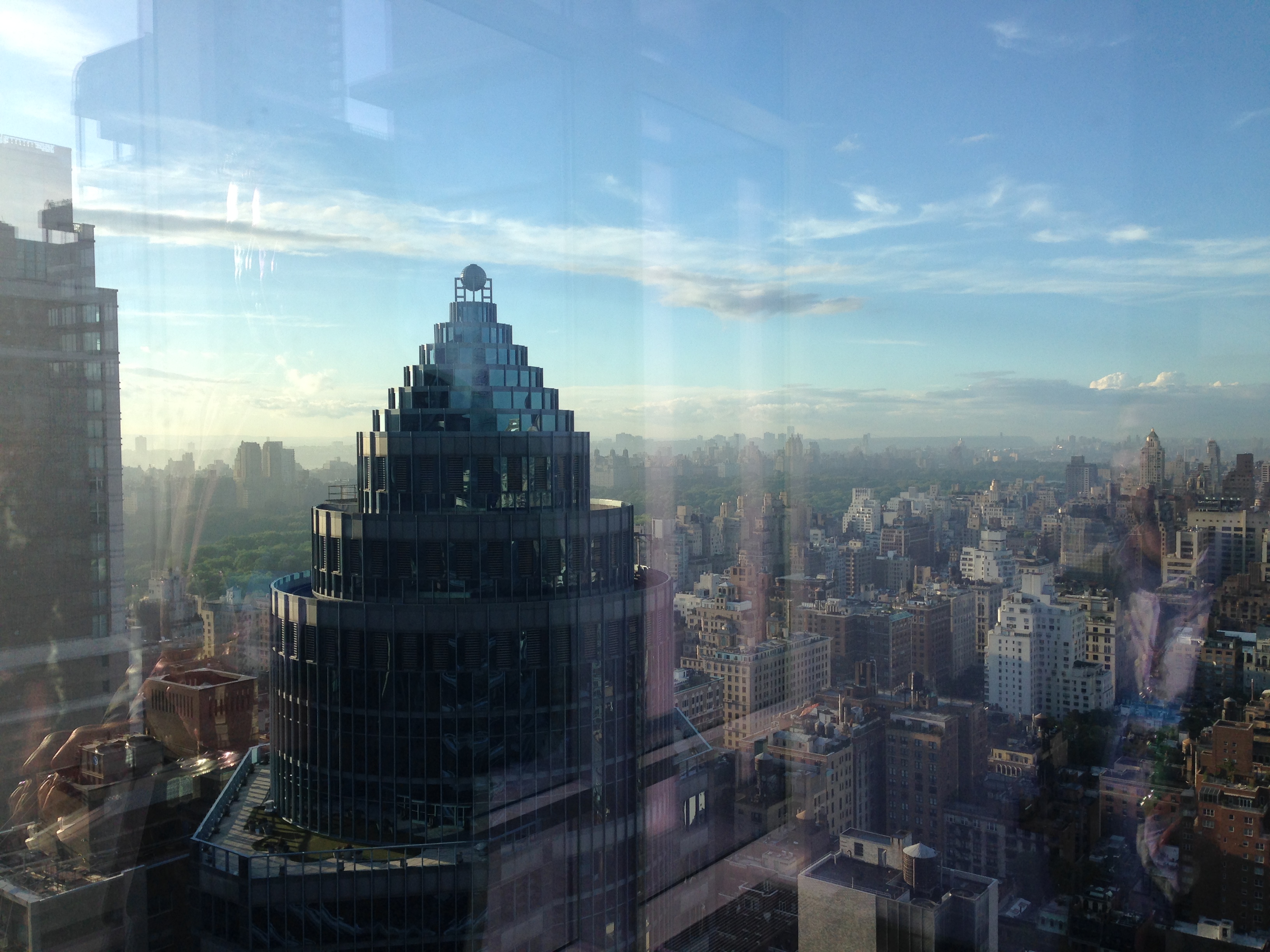 Eventually, the groups lose their surface tension and the evening reaches its final stage, which is the final drink and mingle. As the first streaks of pink and orange appear in the sky, the organizers bring the event to a close, handing out the obligatory t-shirts and thanking us profusely for coming. So fun.