In which Hegel and Hofstadter help us set expectations concerning the problem of governance.

I. Naming things is hard

Naming things is hard, Hofstadter explains, because every name given to a thing is inevitably simpler than the thing itself. A name is a summary, and names are chosen to highlight the most important aspects (according to… someone) of the thing being named. Of course, highlighting certain aspects of something necessarily means downplaying other aspects of that thing.

Naming things is hard, then, because there is always something a name leaves out, and that omission usually ends up being important at some point down the road. A “good” name is one which gets us most of the way there, most of the time – but no name is perfect. The same idea underlies the distinction between “the map and the territory”: a map is always a summary of the territory, a reduction of the dimensionality; a perfect map would be the size of the territory, and thus not useful. A “perfect” name would be as complicated as the thing itself, and thus impossible to speak!

It’s worth noting that that naming gets harder as the thing becomes more complex. For example, a variable named time-delay is fairly complete, just like the title of “goalie” is a fairly good description of that role on a football team. But what about a job like “president”? Or the name of a person? When dealing with more complicated things, naming gets harder.

Hofstadter plays with this idea in one of his many humorous dialogues between Achilles and the Tortoise, in which the former attempts to solve a puzzle posed by the latter, with little success:

Achilles: Confound it all! Every time you give one of my answers a NAME, it seems to signal the imminent shattering of my hopes that that answer will satisfy you. Why don’t we just leave this Answer Schema nameless?

Tortoise: We can hardly do that, Achilles. We wouldn’t have any way to refer to it without a name. And besides, there is something inevitable and rather beautiful about this particular Answer Schema. It would be quite ungraceful to leave it nameless!

Achilles has an intuition for the answer – he somehow grasps the essence of the puzzle – but every time he actually has to transcend amorphous intuition and commit formally to an answer in words, that formalization contains some inherent limitation. This is the essential insight of Hofstadter’s work: anytime we attempt to formalize something complex (“give it a name”), that formalization necessarily leaves something out. This is because formalizations are fixed summaries of the things themselves, and can never capture things in their entirety.

In a certain quite profound sense, the daily headache of programmers naming variables is essentially connected to Russell and Whitehead’s valiant but vain effort to place mathematics on solid, formal foundations (it is highly suggestive that Whitehead spent the rest of his career developing a metaphysics of dynamism known as “Process Philosophy”).

The truth is that we are limited beings attempting to understand a universe more complex than our powers of comprehension. We can incrementally expand our horizons, and iteratively improve our understanding, but we will never quite reach the boundaries.

Before moving on, let’s introduce three thinkers and use their work to develop our argument.

A lot of people think this trio is totally bananas. But let’s play a game and for the next 90 seconds pretend that they were all basically right about everything.

I made you an image containing our important metaphor. Look at it for a minute and we’ll discuss. 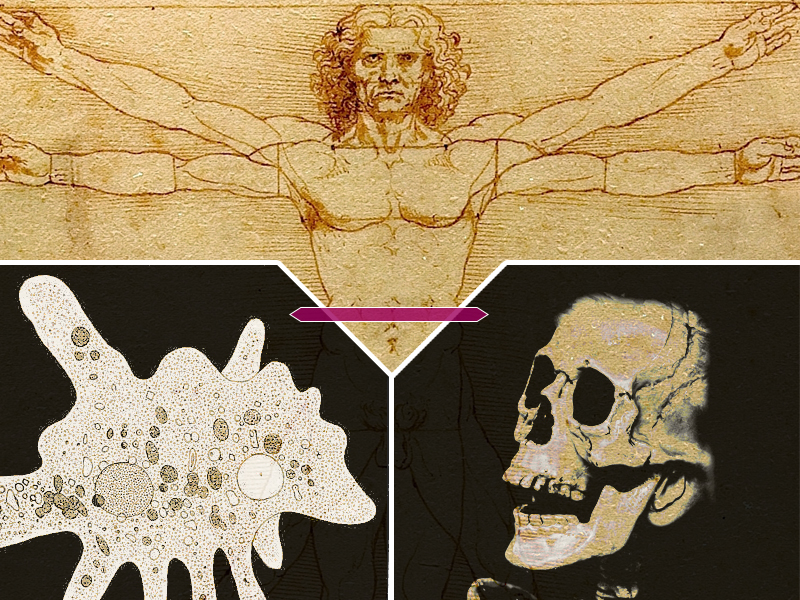 What do we see here?

In the center, Da Vinci’s famous Vitruvian Man, here taken as an archetypal human. Off to the sides, we see an Ameoba (minimally structured biomass) and a skeleton (highly structured but lifeless). The metaphor here is that humans come into being with the hardness (skeleton) is brought into a balanced tension (magenta arrow) with the softness (the organs and tissue). Too far in either extreme and the delicate complexity of the human cannot survive: a lifeless skeleton, or a puddle of goop.

This image provides us our first example of a dialectical tension, an essential component of Hegel’s philosophy. We see similar tensions elsewhere: in between liberals and conservatives, between process and outcome, between freedom and security, and between individual and community, among others. Each one of those names captures the extreme and ideal end of a spectrum, but life cannot be sustained at ideal extremes. It can be sustained only in the tension which comes from bringing the extremes into a dynamic but stable balance. A small nonprofit with pages of bureaucratic rules will get nothing done; likewise, a multinational firm without adequate procedures and policies will be mired in dysfunction.

Note also that the Ameoba can live just fine without a skeleton; but that Ameoba is a simple life form. The skeleton literally provides the backbone for supporting more complex types of life (there’s a reason why vertebrates are the headliners in the food chain). “Solving” a dialectical tension is not the end of the story: it simply sets the stage for the beginning of a new story – this is the essence of Wilber’s argument of increasing levels of complexity, each succeeding level of complexity made possible by the foundation provided by the stable resolution of tensions of the level below.

As an interesting aside (indulge me my amateur evolutionary biology), it is interesting to consider the arthropods (beetles, etc) as representing an alternative solution to the problem of “structural support”. Vertebrates put the structure on the inside, arthropods on the outside. Both solutions provided a stable structure, but had different long-term consequences: the former seems to have been better at scaling up (vertebrates are bigger), while the latter better at scaling across (there are many more species of arthropods).

Even our greatest and most universal “systems” assumed some context: Adam Smith’s initial description of free market capitalism assumed some degree of social cohesion (“fellow feeling” in his words). The various flavors of communist and socialist dream assume some baseline of material abundance to go around. The American republic was designed to withstand factionalism, up to a point. Even Bitcoin, the buzzing, burning Ozymandias of trustlessness, assumes some degree of distribution of computing power.

There is a lesson here for the dreamers of utopian dreams, a lesson taught by experience again and again. There is no system (skeleton) which is guaranteed to work from one end of the universe to the other, from now until the end of time. Every system comes alive only in a living context (the amoeba, the living matter) into which it is embedded; it is the interaction of the system and the context which yield a stable dynamism.

The most successful technologies in history are what you might call living technologies. They engage the people who use them in an ongoing conversation in which both the people and the technology change. Or you could use the word evolve if you like.

What we see here is the difference between plain rules and a set of rules in tension with a living force. The former is necessarily partial and incomplete, while the latter can be capable of amazing things.

Note that most of these successful fusions of rules and context developed incrementally (recall our biological metaphor). Even the American constitution, considered at the time a bold experiment, was an incremental response to the failures of the previous Articles of Confederation, and grounded in lessons learned from a study of classical democracies and confederacies. To develop an elaborate new mechanism and deploy it whole cloth is to court failure.

Note also that incorporating adversarial structures into governance can to some extent reduce the need for structure (or at least change the the types of structure necessary). Since measuring and adapting to an outcome after the fact is much easier than anticipating the entire process which led to that outcome, competitive or relational mechanisms (think courts of law, games of chess, or even employee reviews) can play an important role in giving governance frameworks the ability to evolve over time. In the language of computer science, they measure at a higher level of abstraction.

IV. What to strive for

In 1984, statisticians Persi Diaconis and David Freedman released a landmark paper titled “Asymptotics of Graphical Projection Pursuit”, in which they prove that under suitable conditions, most low-dimensional projections (names) of high-dimensional data are approximately Gaussian, i.e. very lossy. The trick is to find the projections which result in non-Gaussian projection, i.e. those which capture more of the original structure of the high-dimensional problem.

Put another way: some names are better than others, and naming something poorly can be worse than not naming it at all. Consider how the monotheistic deity is often referred to indirectly, via signifiers like “The Power(s)”, “The Name”, “My Lord”, etc, while the mystery surrounding the “true name” has become an alluring subject of esoteric study.

Bringing things back to earth, it will be instructive to look at how different crypto communities have been approaching governance on the ground. Current “on-chain” (i.e. explicit) approaches, such as those used by EOS and the original, infamous, Ethereum DAO suffer from meager participation among voters. On the other hand, the “off-chain” approaches taken by Bitcoin, Ethereum, et al (in which the “mechanisms” are implicit, or “unspoken”) have achieved varying degrees of success, leading Vitalik to reverse his position in favor of off-chain governance.

The issue at hand is that the “rules” for on-chain governance are too crude to avoid being captured by the social context (see: collusion among EOS block producers). Given these crude tools (names), it is better to leave governance “unspoken”: it will necessarily be smaller and more exclusive (the Ameoba), but this opacity is a guard against explicit capture by keeping the rules concealed inside of “culture”. The conclusion is not that off-chain governance is better (to conclude that would be to conclude that cliquish one-party rule is better), but rather that we still need to develop the language for describing governance mechanisms that can hold tension with the living force of the community.

What, then, to build? In short, better backbones, embedded within a committed community. Build new social infrastructure which solves a few current problems without reintroducing ones we’ve already solved – while current governance systems might seem far from perfect, don’t underestimate the amount of weight they successfully support. Try to make it robust against most types of failure. Don’t expect your thing to work forever; eventually the social context will change and the tension will cease to hold. But a few years is plenty, a few decades ideal. Buy us time so that the next time around we can see a little bit farther and do a little bit better.